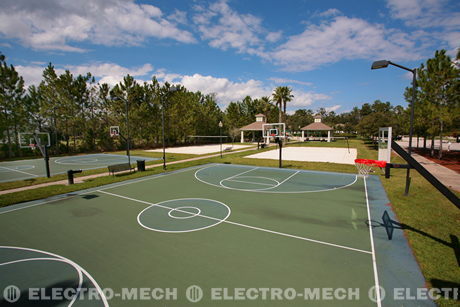 While most basketball fans know that James Naismith was the inventor of the game of basketball, not many know that the first game ever played was done so with a soccer ball. The history of basketball and the invention of the basketball itself can be traced back to the late nineteenth century.

At a small college in Springfield Massachusetts, physical education teacher James Naismith developed the game of basketball to help keep his students in shape during the harsh winter months. During his classes he divided the students into two teams and the first game was played with a soccer ball, two peach baskets and countless stoppages in play to remove the ball from the basket. As the game continued to evolve, Mr. Naismith approached a man by the name of AG Spalding and requested the production of a ball specifically designed for his new game.

Mr. Spalding developed a basketball ball design which has stayed relatively the same throughout the century with the exception of some minor changes. It consisted of an inner rubber air bladder surrounded by leather panels that were stitched together. The addition of a cloth liner provided extra strength and uniformity for the basketball. Today’s basketballs are constructed pretty much the same way with an inner bladder surrounded by either a synthetic composite material or the traditional leather. Each league, such as the NBA, NCAA, and European leagues have their own specific standards for its weight, diameter, and pressure rating.

Although the size, color and weight of official league basketballs are pretty stringent, there have been several color variations that have made their way to the consumer market. Probably the most famous color variation to the basketball was the red, white, and blue ball used in the ABA during the 1970’s. The WNBA, the other league to use a multi-colored basketball, uses a white and orange basketball. Basketballs have also become popular promotional items for many teams and leagues across the nation. Mini-basketballs or specially designed full-size basketballs with a company logo or slogan have become an effective tool in sports marketing.

The game of basketball has been around for over 100 years and while the game itself has changed dramatically, the basketball itself has remained the same. From the early days of the Spalding Company, who invented the basketball, to the modern composite models, very little about the design has changed. No matter how much the game progress in terms of player speed, size and strength, there will always be two constants. Two baskets and a basketball are all you need to play the game.

As a company that produces electronic basketball scoreboards, Electro-Mech is dedicated to providing you with information on all things basketball- history included. Check out our other posts for basketball news, scandals and trends.

2 thoughts on “Who Invented the Basketball?”