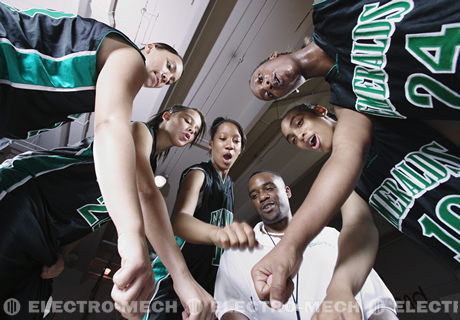 North Korea is a mystery to most of the world. Their exclusionist attitude, the brain washing of the people, and their lack of association with anything that the rest of the world is involved with, has kept most people scratching their heads as to who they really are. The rather strange visit of Dennis Rodman to North Korea, along with his own bizarre behavior, has had an effect on North Korea when it comes to the topic of basketball. It appears, that the ‘dear leader’ (Kim Jong-Il) also loves basketball, but in his typical methodology, has created his own rules for the game.

As reported by the Chinese media, some of the scoring system rules for North Korean basketball games include giving a dunk three points, a basket scored in the final three seconds will receive eight points, 4 points for a 3-pointer that doesn’t touch the rim and getting a point deducted for a missed free throw. This attitude of rules lends to a more cut throat style of game, and one can only imagine what the last few minutes of a North Korean basketball must be like.

Apparently, the ‘Kim rules’ were established due to the fact that Kim has had a long time love affair with basketball. His reasoning behind his own form of basketball is to try to make the game more ‘entertaining’. He seems to award extra points for pretty shots, as opposed to actual talent. Kim is notoriously nocturnal, watching pirated satellite television at night and eagerly watching basketball games. There aren’t any electronic scoreboards or elaborate technologies in North Korea, only the teams and the games.

While many of us may shake our heads at the strange ‘Kim’ haircut or shiver when we think of this neurotic individual testing nuclear devices, Senator Rick Santorum, R-Pa stated “Kim doesn’t want to die. He wants to watch NBA basketball.” Apparently this statement may help to explain why there are specific game rules that are ultimately, Kim’s. It seems, that Kim Jong-Il is addicted to basketball.

The love of the game isn’t shared with the North Korean people, as they aren’t allowed to have access to the internet, cell phones, free press or even satellite television. But everyone associated with Kim knows and understands that ‘basketball is the top priority’. This was specifically notated during a rare visit of North Korean officials to the U.S. in the 1990’s. While discussions to try to find common ground continued on the upswing, suddenly, everything stopped when it was announced that “Michael and the Bulls were on TNT” and they had to watch the game. The rest of the meeting was held in front of the television, talking about basketball moves, instead of political ones.

In an attempt to regain talks in 2000, Madeline Albright was the first Secretary of State to make a visit to North Korea. At the end of the talks, Ms. Albright presented Kim Jong-Il with a basketball that had been autographed by Michael Jordon. The basketball holds a place of honor in the North Korean complex entitled “Museum of International Understanding”.

If there is a next visit, maybe the U.S. representatives might want to consider bringing along an electronic scoreboard as a gift. Just a thought!