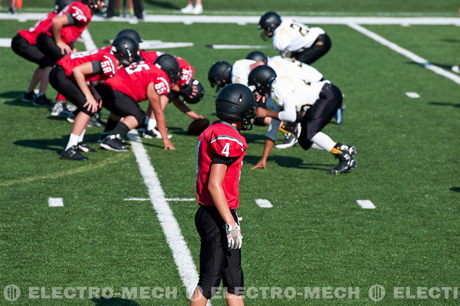 Taking a Stance and Moving on the Ball

Taking the proper stance allows a defensive lineman to maximize his effectiveness. Taking a stance begins with the player standing with his feet pointing straight ahead and at shoulder width. Keeping his back straight and his head up, the lineman bends his knees until he is able to rest his forearms on the insides of his thighs. Then the defensive lineman puts his hands on the ground, just a bit ahead of his shoulders. The palms should be off the ground so that the player is leaning down on his fingers. If it is a passing down, the lineman may take a staggered stance. The foot that is closest to the ball is moved back so that the toes are even with the heel of the other foot. A good defensive line drill is to have the lineman practice getting into this stance and exploding forward when a coach in the center position moves the ball or moves his body.

6 thoughts on “Football Drills for the Defensive Lineman”