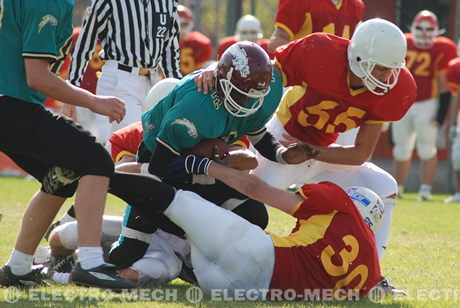 In football scoreboards news, we look at the 18 game season and ask, is it too much?

Bill Polian, the President of the Colts, recently was quoted as saying that the creation of an 18-game regular season is essentially unavoidable. This is after people from across the NFL industry have been voicing their opposition to the idea. Non-less than the players themselves, who are almost unanimously against the proposal.

Football scoreboards will take a look at the reasons why so many people are against this plan. The human body is not able to take two games of football in one week, especially at the professional level. The extra punishment the players would receive is a big issue. This is just as the concussion controversy is on players and fans minds. The game is brutal and players can only take so many hits. The injury list would be likely to increase further, and even less players will make it through to the post-season.

An 18 game regular season would also mean that the calendar change would lead to less time to play pre-season games: most likely the pre-season would be cut from four games to two games, and these games are very important for late round draft’s to ply their case for a spot on the team. Lets take the Colts player Gary Brackett as an example. He said that he needed all four pre-season games to show what he could do and to get onto the roster. With just 2 pre-season games, the starters would get most playing time to prepare them for the season.

Naturally, being the NFL, the financial aspect is critical too. Club owners are against it as they will be pressurized to increase player salaries. Of-course players are aware that they will get no increase in salary for their efforts regardless of how much pressure is put on club owners, and with the game as it is today that is all-important.

Also the proposal would move some NFL games to Saturdays, which means that the start of the season could see games coinciding with college football, which a lot of people will not be happy about. College football would certainly not appreciate direct competition from the NFL.

All in all the majority of people associated with the game are against the plan for the reasons outlined above, but it seems like a minority of very influential people are for the plan, and they might well get there way. I guess, if there is a cloud in the solver lining, there will be 2 more games for fans to enjoy each season!
For more information on the NFL, go to: www.nfl.com