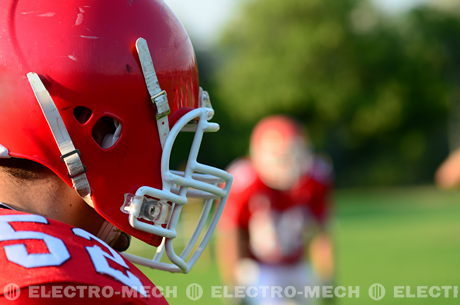 In a football scoreboards feature, we compare the great games of football and rugby and ponder the quesion: which is the toughest?

The first obvious difference is that football players play in small bursts often of just a few seconds, and the football scoreboards show that they generally play no more than 40% of each game as each football team essentially consists of three teams, and subs are unlimited. Rugby players can be substituted, but often they play for the whole game and they spend much more time running as they game is stopped much less than football. This means that rugby players have to have much more stamina, but it also means that football is open to stronger and bigger players with less natural endurance. Football players can be considerably bigger; in fact the heaviest football players are around 380 pounds, whilst rubgy players max out at around 280 pounds.

The big argument is about the padding. Some people say that this makes football softer and easier on the body, whilst others suggest that the padding means that the players hit each other harder, so football is rougher. Both camps are right. Football players do indeed hit quite a lot harder than rugby players, who have to be more careful not to injure themselves or the other player, but the net result of the collisions are probably about the same for each sport. Do you want to be knocked down by an elephant whilst you have padding on, or by a horse without any padding? Now that’s as tough one!

Generally football has more aggression going on during a play, as all the players are fighting it out, whilst in rugby just the players near or on the ball are involved. Both sports give rise to physically impressive players. We all know about football players, but few US sporting fans have seen the top rugby players in action. Watch a top Australia vs New Zealand game and you will be impressed with the power and speed of the players.

Both of these sports require many years of dedicated training in order to get to the top. Not one of the professional players could transfer from football to rugby or visa versa and expect to succeed straight away. Whlst many of the skill sets are similar, many of them are quite different too. In rugby, for instance, the runners play much more of a team game. The onus is not on them to run as far as they can, but to interplay between the runners to thread through the opposition defense.
Clearly both football and rugby are hard and tough games, and anyone who has played them will attest to this. Perhaps the answer to the question, which is the toughest, comes down to how the individual plays; neither of the games are tougher than the other, but both of them have players who play harder than anyone else, the players that make you flinch when you watch the highlight reel!