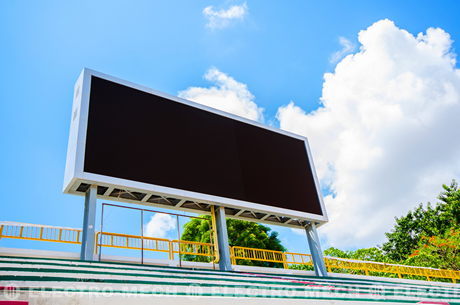 While some of us may remember the days when a large scoreboard actually created the structural look of a stadium (as in the case of the Angels Stadium in California), the evolution of electronic scoreboards has made drastic changes in the last fifteen years.

The dynamics of the electronic era has jumped from the standard bulb displays to the latest in high tech LED. The introduction of the LED lights not only offered brighter, crisper and more exciting colors, but are a savings in the previous electricity hog lights. This jumpstarted a whole new line of interests in technology. An electronic scoreboard started to be viewed as more than just a place-for-a-score-update, but became an icon of visibility with sponsorship views in more graphic formats.

The availability of wide screen televisions for the standard household changed everything. Stadiums needed something to bring the fans in, so they wouldn’t sit on their couches at home to watch the games. So they began to build big. Not only big, but bigger and bigger. The LED screens became video displays and the tech crews went crazy trying to supply all of the cabling for the demand.

The internet changed everything. Now you could have big, bright, high definition, video feeds, real time displays and full on promotions. The audience didn’t just look at the electronic scoreboard for the score any longer, it became an integral part of the stadium experience. Full video replays, slow motion, and camera spans of the audience became part of the day. As managers and sponsors alike realized that the electronic scoreboard also carried an emotional bond, ad and product placement along with highlighted moments were added. It is not uncommon to see a young man making a proposal to his fiancée or a couple celebrating a fiftieth wedding anniversary on view to thousands of fans.

Electronic scoreboard design has become an art within a state of the art line of business. Each stadium is scrutinized, analyzed and customized for the best fitting scoreboard to fit their needs. Musical concerts and special events will be expected to display every little detail in high definition screens. Stadium managers plan visits to other stadiums to view the latest in technology to see what their own next generation screen should have.

In some cases, the electronic scoreboard has become such a focal point, that a new stadium design itself is planned solely around the positioning of the scoreboard and the audio quality that will be available for the fans. Sponsorship is top priority as well. The bigger the scoreboard, the higher the attendance, the higher the attendance the more a sponsor’s branding will be viewed. Payoffs are big business on the promotion side.

Wireless is now the name of the game. When you combine wireless capability, you can add a plethora of flexible tools and easier to use control areas. The internet, social media and SmartPhones have added another facet to the electronic scoreboard so that the game, the stadium, the sponsor, the products and everything associated with the venue can be viewed on any type of platform, anywhere in the world. Winning messages can be texted and updates are accomplished in nanoseconds.

The latest group of new digital marketing companies are partnering with stadiums to offer one-stop-shopping for professional staff, announcers, tech controllers and feeds to local television stations. The electronic scoreboard has not just progressed, it has leaped out as a major influence over so much of an event that the statistics are staggering. The information age has joined the game and the adventure goes on.