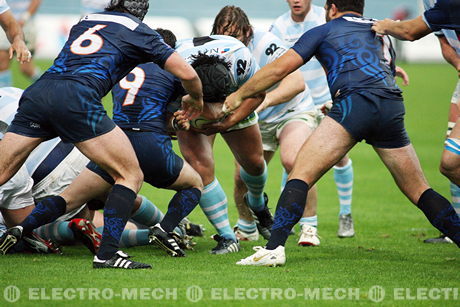 The NFL combine has a host of drills for various positions through which they can accurately measure the athlete’s abilities. In this article, we are going take a football scoreboards look at the Quarterback drills and see what the coaches want from prospective quarterbacks.

When you think about a quarterback in the NFL, what do you think about? His pass! And this is what the combine is all about for the prospective quarterbacks. The team representatives want to see the quarterback throw the football. However, it not just the throw itself that they want to see, it is also the various positions and techniques that they want the quarterback to throw under. Through the combine, they get a good idea about whether the player name is likely to light up the football scoreboards in the future.

Many quarterbacks worry that as they don’t personally know the receiver and have never played with them, they might throw over or under them giving the reps an inaccurate estimate of their skill. However, the reps do not care whether the receiver catches the pass or not. All they are interested in is seeing the quarterback’s footwork while they are running the 3-step drop, the 5-step drop and the 7-step drop.

In the 3-step drop they want to see how the quarterback handles and positions the ball: under-center. This is because most quarterbacks in college have never been under-center; they’re usually all back in the spread. They see and study the footwork, how the QB plants himself and drives the throw.

In the 5-step drop (intermediate route), the QB has to take 3 big steps and 2 small steps, get the ball and throw it out right away. Therefore, their footwork is essential.

In the 7-step drop (a deeper throw) the footwork, again, is very critical. Bill Walsh said that he could tell by looking at the quarterback’s feet (footwork) whether he had a good or a bad game. The second thing they notice is the carriage i.e. how the quarterback carries the football. Is it up towards the shoulder or is it below towards the center of the chest and stomach. However, ever since Philip Rivers no one can positively judge the quarterback through the position of his carriage.