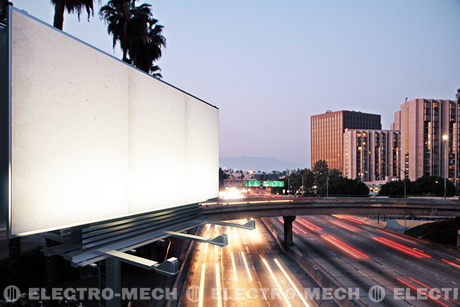 The next key point in the development of the advertisement billboard was the invention of the movable printing press by Johannes Gutenberg in the middle of the 15th Century. With this invention, paper advertisements were born, which was a major point of innovation in advertising until outdoor advertising caught on. Innovations in advertisement billboard form didn’t occur until the late 18th century when the lithograph was invented and the first illustrated poster was produced. Soon enough, people began to erect posters in some of the more high traffic areas of town in order to ensure that potential customers would be exposed to their message. This was what also occurred in the United States until the 19th Century.

The first instance of outdoor advertising that utilized a large poster which was larger than 50 square feet in order to advertise for the circus occurred in New York in 1835, and was the product of Jared Bell’s printing office. Another major point in the family tree of the advertisement billboard was the use of the exterior of trains for advertising. From then, billboards were used to advertise anything and everything around the main strip of town and along major roadways, so much so that they have become an American institution and are relied on by motorists. Since then led advertisement billboards have become the mainstay of outdoor advertising. I can speak from personal experience when I say that Led advertisement billboards are superior to plain, static billboards. For one, they grab your attention better when you are traveling along at 70 mph, and they also are capable of featuring many different messages.

Nowadays it’s hard to imagine outdoor advertising and sport stadiums without LED advertisement billboards. People pretty much expect when they go to a sporting event to see advertising, and there is no better way of accomplishing that then in the use of the led scoreboard. Most stadiums and sports arenas use a led scoreboard that also can function for advertising. Sometimes you’ll see a simple led scoreboard, or you can also see an extravagant led scoreboard with all the bells and whistles on it. They are multi-functional in that they can display stats important to the sporting event, but they can also draw in advertising revenue and draw people to the concession stand during the seventh inning break, for example. LEDs also run off of not much electricity as well.