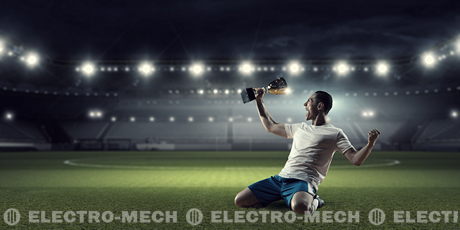 Preparing for the 2010 FIFA Cup in South Africa was a monumental undertaking. While we viewed the elaborate stadiums and the phenomenal electronic scoreboards, we didn’t have a clue at the incredible amount of work that went into these gala events.

If you were lucky enough to attend the 2010 FIFA Cup games, you were probably overwhelmed with the absolutely incredible stadiums. No where else in the world was imagination, architecture, art and local culture combined in such a way for stadiums.

In Johannesburg, the Soccer City Stadium took three years to renovate and redesign. Known as the site that Nelson Mandela made his first public speech, it was enhanced to change the previous 80,000 seats to one that would accommodate attendees numbering to 94,700. While it became the largest stadium in South Africa, the design was impressive. The circular shape emulated a native cooking pot with a ring of outside lights to represent the fire for cooking. Any spectator that was seated within one hundred meters of the field would also have perfect viewing.

The graceful flowing design of the Moses Mabhida Stadium is enough to take your breathe away. The inside layered seating creates comfort for a smaller attendance of 54,000 but can hold up to 80,000. It is a multifunctional facility offering an indoor arena, a football museum and sports education facilities. The natural grass turf is enhanced by the fact that the roof is not entirely closed. The arched design is reflective of the Wembley Station in London, England. There is an observation view that includes the city of Durban complete with the far off view of the ocean.

Green Point Stadium in Cape Town used the existing stadium area in the heart of Cape Town with upgrades to keep the city noise out with a lovely urban park. Its central location has made it the heart of excitement and when it’s lit up with all of the lights, it appears to be a crown in the center of the city.

The Ellis Park Stadium in Johannesburg was originally built in 1928 and in 2008 became known as the Coca-Cola Park when the famous beverage company paid a rather nice price for the name. The park has the distinction of being the first stadium with black ownership.

Loftus Versfeld Stadium in Pretoria was a well used stadium since 1906. Over the years the continued upgrades and renovations gave it the distinction of being one of the only venues to need minimal updates. Seating capacity is over 51,700 and the traditional stadium styling is perfect for the many music events that are held there.

The Nelson Mandela Bay Stadium was one of the five totally new stadiums built for the 2010 FIFA Cup games. The architecturally designed roof is supposed to appear like interlocking flower petals and has therefore been named the sunflower. The view overlooks the North End Bay Lake.

Free State Stadium in Bloemfontein may have only been fifteen years old, but needed quite a bit of renovation to accommodate the required seating. The addition of a third tier along with the new media center and electronic scoreboards offered a high tech appeal. The enhanced audio makes this one of the best stadiums for overall view and sound.

The Peter Mokaba Stadium in Polokwane is one of the smaller stadiums but has a coveted feature of natural grass combined with synthetic grass fibers. The design is a type of blend between traditional stadium appeal and the sloping grace of the top tier.

The Royal Bafokeng Stadium in Rustenburg is proudly owned by the Royal Bagokeng nation. They stadium resides on land that has been their home and community since around the twelfth century AD. This original 1999 stadium receive numerous high tech upgrades including state of the art electronic scoreboards and new light and sound systems.

In Nelspruit you will find one of the most highlighted stadiums: Mbombela Stadium. The cantilever roof design was created to emulate the giraffes that appear in the Kruger National Park that is close by. The unique style and design of the interior seating is beautifully landscaped with the look of a zebra motif.

South Africa is one of the few countries that married style, culture and an artistic touch to all of their sports stadiums.