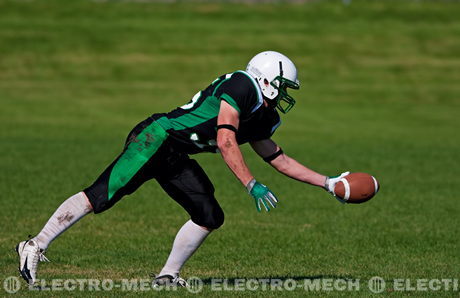 Here is some of the excellent flag football strategy that Dr. G includes in his blog

Create a Playbook
Getting key plays down on paper is a key organizational tool for a flag football team. Providing each player with a copy of a playbook means that everyone is in on the plan. It can also help to clarify confusion about certain plays. A playbook does not have to be anything fancy. Some stapled photocopies work fine.

Have Players Wear Wrist Bands That Show Plays
A wrist band can serve as a portable playbook. Including the most frequently used or most successful plays can save time in the huddle and cut down on mistakes. It also gives a player something to turn to if the name of a certain play doesn’t ring a bell.

Pressure the QB
The quarterback is the player in the best position to hurt your defense. Making life difficult for him can reap large benefits. Use your best players as pass rushers, and you may wear the quarterback down and frustrate into making ill-advised throws.

Pitch the Ball
In flag football, there are fewer players to cover the field. As a result, getting a speedy player to the outside can result in a big play. A pitch play is a lower risk than it is in tackle football, because if the pitch is fumbled the ball is dead. Practicing your pitch plays so that the timing is crisp can give you a serious weapon in your arsenal. Mixing in a quarterback option can create big problems for a defense that has not played against it before. Developing good pitchout skills also allow for a greater variety of trick football plays.

Character Counts in Key Positions
You need players you can rely on at quarterback and other key flag football positions. If your most talented players are prone to temper tantrums or arguing with teammates, consider finding a more peripheral role for them if they do not respond to coaching. You don’t want your leaders to be setting bad examples. Others might follow them.

Avoid Turnovers
As in other kinds of footballs, statistics show that a bad turnover ratio is one of the surest roads to failure in flag football. In flag football, almost all turnovers are interceptions. The quarterback should learn to throw the ball away or take off and run when no one is open. Throwing into traffic is asking for trouble.

Here are some tips from footballbabble.com:

Rotate Players
If a team has more than the required number of players, the coach needs to watch for which players are tiring. The coach may want to consider keeping some talented players off the starting unit so that the team can receive a “boost” at key points during the game. Starting only the top players also runs the risk of having to bring several less talented players in at about the same time as the starters need a rest.

A final tip comes from usaflagfootball.com:

Avoid Injuries
Have a comprehensive warm-up routine before practices and games. Mouthpieces should be worn to protect the teeth. Try to avoid playing on fields that are in poor condition; for example, the grass has many bare patches.