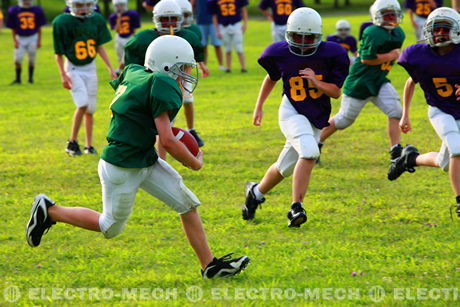 As early as 1937, a stadium was built for a max capacity of around 33,000 fans. The original name was Roesch Memorial Stadium, later changed to Grover Cleveland Stadium (in honor of the renowned President and former Buffalo resident) and then Civic Stadium. In 1960 the name was finalized as War Memorial Stadium. One of the smallest venues for football, the people of the area supported the many renovations to give it a final capacity of 46,500.

Through the many years, the stadium was the place to go for the locals. Any game was a good game and a reason to cheer their team on. It was called ‘The Rockpile” and “Ol’ Rockpile” affectionately by the people of Buffalo, but not with such pleasantries by others that visited the area. The small size along with lack of upkeep gave the stadium a run down look and less-than-appealing invitation for the players of other teams. None the less, it was home stadium for the fans and fiercely defended.

War Memorial Stadium was the host to the American Football League, the Buffalo Bills; the unrelated Buffalo Bills of the AAFC, and the American Football League Buffalo Indians and Chiefs. Football wasn’t its only crowning glory, as the baseball and football teams of Canisius College played there as well as a NASCAR Grand National Race in 1958. The need for a larger capacity stadium was finalized when the Bills finally moved to the new Ralph Wilson Stadium with seating for over 80,000.

War Memorial Stadium was pretty much empty from the years of 1973 through 1978. The Buffalo Bisons were the last tenant until they relocated in 1988 to Pilot Field. The stadium was in such poor condition that it was perfect for the film “The Natural” in 1984. Virtually every scene (except one) was filmed at War Memorial Stadium.

Starting in 1988, the plans began to demolish Ol’ Rockpile. It has lived out its usefulness and it was time to plan for more grandiose designs. An athletic field for the local high schools was planned, but, the stadium hadn’t been completed destroyed. The southeast and northeast entrance of The Rockpile was indeed preserved, with a southwest corner housing a baseball diamond.

The Rockpile had been an icon in Buffalo, with more history and memories than could ever be related. Preserved now only in photographs and photo slide shows and in the minds and hearts of the people of Buffalo. It is appropriate that the young generations of track and field players are now using the site.