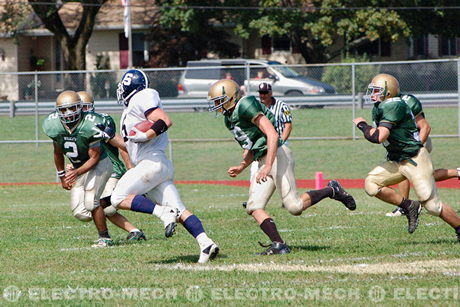 In a football scoreboards feature, I have taken a look at the linebacker position in the NFL combine. The favorite drill for all team representatives at the combine for the linebacker is the pass-drop and hip rotation drill.

What Happens in the Drill?
In this drill, a football scoreboards coach stands across you and starts you with a 5 yard back-paddle for (by motioning you with the football in his hands). Then he will turn his hand one-way or the other (left or right), giving you a direction to run into. As soon as he directs you, you open your hips and drive in that direction without turning your back on the coach. You must always keep your eyes on the coach no matter which way you are directed into. The coach is going to give you 3 more changes of directions (of his choosing). The quickness of your response to the coach’s abrupt changes in direction is all that the team representatives need for gauging the swiftness or stiffness of your movements. This drill exposes athletes who cannot move or are unable to move fluidly in a given space.

After the 3 changes in directions, the coach is going to bring you home (where you started off from) just like a quarterback. Remember, never to take your eyes off the coach, watch him as you would a quarterback. When the coach brings you home (directs you with his hands), you plant your feet, pivot and run full speed the other way, intercept the football and take it to the house.

What Are the Football Scoreboards Team Representatives Looking For?
The drill is so effective, that by simply watching the tape of a linebacker a coach can tell if the athlete is tough and instinctive or not. However, what coaches are primarily analyzing is if the athlete is a 3-down linebacker. A great athlete can be a 2-down player against run, but how is that athlete going to fair in the pass game, especially in today’s NFL games where the ball is being thrown more and more?
It is very easy for the coaches monitoring your movements to see the athletes who can change from a 4-3 defensive hand to a 3-4 outside linebacker.

Besides this drill, one of the favorites of the team representatives is what is called the “conversion guys”. This tests the athletes who have their hands on the ground, if can they stand up and play linebacker.
At the 2009 combine, Robert Ayers and Larry English both ended up going into the 1st round. They were college defensive ends but in this particular drill they convinced coaches and scouts that they could stand up and be effective on all 3 downs in the NFL. This highlights the importance of the “Conversion Guys” drill for defensive ends going for the linebacker position.