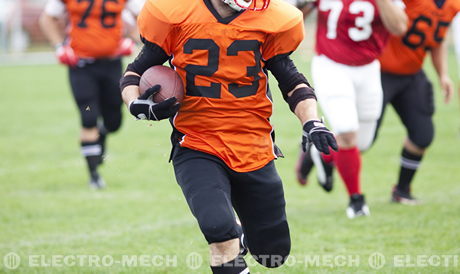 What Happens In The Drill?
A coach will start a defensive back at a back paddle, which is the basis for everything a defensive back does. The coach starts the defensive back at a back paddle of 5 – 10 yards, and then (the coach) will motion the athlete to comeback towards him. Therefore, the athlete is changing directions during his paddle. He moves towards the coach and then the coach gives the athlete a speed turn direction. This simulation emulates a scenario much like in a man-to-man play. This is a double move in which the athlete will have to plant, pivot, keep his weight and hips down, turn and go. This leaves the athlete’s back completely to the quarterback, like it would be in a speed turn in man-to-man. At approximately 15 to 20 yards, as the athlete is running, he has to turn around and locate the football.

What Are The Football Scoreboards Team Representatives Looking For?
The general term used by coaches and scouts, to refer to the athletes’ ability to locate and catch the ball, is “ball skills”. The favorite aspect of this position (Defensive back), in the NFL, for the coaches is to study the athletes’ ball skills. However, the ball skills of athletes are getting worse because quarterbacks and wide receivers are relying more and more on the back shoulder and under-throws, making it difficult to locate and catch the football.

There are 3 things coaches and team representatives want to see in this drill from all athletes. First, the back paddle, which is the basis for what all defensive backs do. Second, the change of direction (moving back towards the coach), which includes the athlete planting his feet and the swiftness of his turn. Third, the athlete’s judgment for locating and catching the football. Once the athlete’s back is turned to the quarterback, the athlete cannot see the ball until he turns around and searches for the ball in the air. He has to judge the distance/height of the ball and decide whether or not he should drive for it. In short, the defensive back becomes the wide receiver at this point.

A few years back Aqib Talib, a defensive back from the University of Kansas, wasn’t as fast as some of the defensive backs in his group, but he never let the ball hit the ground which made him look like a wide receiver.
Coaches like to watch this drill because it exposes defensive backs that cannot locate the football and then cannot catch the football.