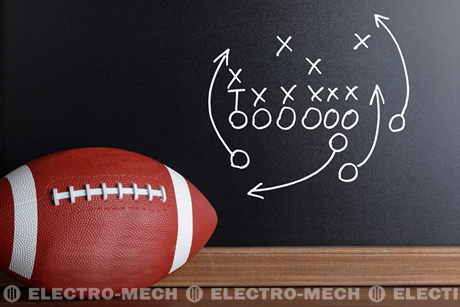 Football has become an iconic American sport, with billions of dollars spent each year on teams, players, stadiums, electronic scoreboards, equipment and, of course, merchandising. The sport itself has experienced an evolution, from humble beginnings as a spinoff of a kind of Rugby game, to the mega-sport of today. If you could turn back the hands of time and attend a football game in the 1920’s, you might not want to watch it.

Technology advances have brought about a number advantages in our lives, from high speed internet to manmade materials for space, and, of course sports equipment. This was not so in the 1920’s, where you would see players on the field, without helmets (or any protective headgear, for that matter). Years later, when helmets were considered optional, they were made out of mole skin or leather straps. The introduction of headgear was due to the fact that players were dying from injuries experienced during the game.

Face masks were another addition that seemed to be slow as an addition to sports equipment. Football players were consistent getting hit in the mouth, causing massive facial and teeth injuries. In the 1920’s, the players themselves came up with some rather scary and down-right eerie looking nose guards. This equipment appeared closer to a medieval knight than sports equipment. Attaching such an apparatus to a helmet was not only a challenge, but often impossible. While there have been quite a few that take credit for the creation of a kind of wire mask, covered in rubber, it wasn’t until Riddell developed the first manufactured mask, made of Lucite, in 1953, made for Otto Graham, of the Cleveland Browns.

This may seem difficult to believe, but in football, there was more of a priority in protecting the player’s upper body, than in head protection. The invention of football shoulder pads was by L.P. Smock, who was a student a Princeton. His 1877 design were made of wool and leather and were actually stitched onto the player’s jersey. After the turn of the century, we see the development of the ‘harnessed’ shoulder pads that are over the head and attached via the chest area. While an improvement in design, they continued to be made of a combination of canvas and leather. It wasn’t until the 1960’s and 70’s that plastic shoulder pads appeared. By the 1990’s we saw the advent of the bulky padding that our players today wear.

Football pants seems to have experienced almost know change, with the exception of materials. Originally, football pants were made of canvas or wool, with knee padding sewn in. Hip pads were an addition that came later. Today’s pants incorporate much of the original designs but are made of tougher synthetics that allow more ‘breathability’.

Football ‘boots’ of the 1920’s were astonishingly closer to regular every day shoes. The fact that the players could run and compete at all is simply shocking. Looking back on these shoes, they appear closer to something that girls of today would wear, and not an athlete. But, safety wasn’t the key reason for any re-design; instead, it was competition. To get a better ‘edge’ for the game, players wanted to add metal cleats to the shoes. Over the years, the gridiron shoe was developed and the topic of football athletic shoes has become big business.

Overall, a game in the 1920’s would have horrified an onlooker of today. We can look up at our favorite players and teams on the electronic scoreboard of today and know that the sport is a bit safer than it was before.