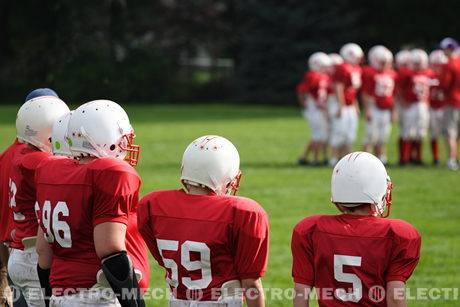 At Electro-Mech, we manufacture and sell football scoreboards. In addition, we have a blog that follows what’s new and what’s interesting in the world of football, basketball, soccer and baseball. In this article we look at the five biggest bloopers ever made in the NFL.

It was the 1986 playoff game in Chicago against the Giants. It was a freezing cold January day with a strong wind. Just the sort of wind that kickers and kick returners fear. Sean Landeta, a second season punter, became the victim of the wind. As he attempted to punt close to his end near the beginning of the game, a massive gust of wind took the ball away from him as he dropped it and he barely got any foot on it at all. Chicago then picked up the loose ball up for a touchdown, and the Bears went on to win easily. Although the blooper had no baring on the final result, it certainly didn’t look good as far as Sean Landeta was concerned!

1978, Giants vs Eagles. The football scoreboards showed that the Giants looked set to win, with just one minute left, no timeouts, and the Giants QB simply needing to go to the ground after the snap to win. However, the coaches told him to hand the ball off to the running back. Unhappy with this decision, the players did not prepare for the move properly, and the handoff was completely botched. The ball became loose, the Philys grabbed it, scored and took the victory!

It was 1993 – Super Bowl XXVI. The Cowboys looked set to win against the Bills, but Leon Lett completly messed up an easy catch and lost them a touchdown. The same player did the same thing against Miami a season later. The Cowboys had a small points advantage, and Miami a field goal attempt. The kick was blocked, and all the Cowboys needed to do was not touch the ball. However, for no reason whatsoever, Lett dived on it, missed it, the ball became live again, and the Dolphins got it and won the game!

In 1972-73 the Dolphins went undefeated and won the Super Bowl VII. They still managed to make a big blooper though – in the fourth quarter of the championship game, their field goal was blocked, and GaroYepremian grabbed the ball and tried to pass it, but dropped it. He then tried to bat it away, but instead just directed it straight towards the hands of the opponent player Mike Bass. Yepremian then made a terrible tackle attempt on Bass, who went through to score a 49 yard touchdown.

In 1964, the fantastic Minnesota Vikings defensive end Jim Marshall made a ridiculous error. He grabbed the ball after being turned around by a block and disorientated, and head at top speed for the end zone – only towards his end zone and not the opponents! He ran the full 70 yards to the line, before throwing the ball out of play. His team mates, coaches, 10s of thousands in the stadium and millions watching on TV could only drop their jaws in disbelief. Fortunately, the error had no outcome on the final result, but unfortunately for Marshall he will always be remembered for it!

For more information on the NFL, go to: www.nfl.com