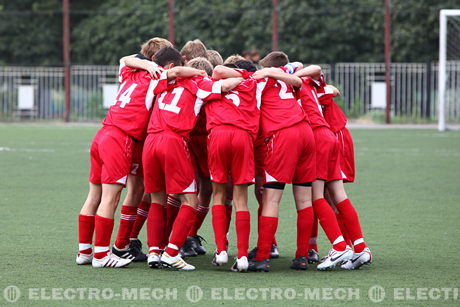 In soccer there are some rivalries that are considered “special,” and games played between two such teams are not just a battle for points, but more a battle of pride for the players and fans of as they go at it with an intensity that “normal” matches can rarely produce. Some rivalries are so intense that blood is shed after the match between the fans, although this less common than it was a generation ago. In this soccer scoreboards feature, I have taken a look at the most fierce soccer rivalries of them all!

4. Manchester United vs. Liverpool
This rivalry is better known as the Derby of England. The reason behind this rivalry is that these two teams are the historically most successful and accomplished teams in England. They are also two of the richest clubs in the world, and they have some of the most accomplished players in their ranks as well as some of those most passionate fans, who, it has to be said, hate each other! When these two sides meet, the match is surely a cracker! Few games can generate such noise, such emotion and such energy on the pitch. In their latest game (in March), the soccer scoreboards show that Liverpool has a memorable 3-1 win.

3. Inter Milan vs. AC Milan
The rivalry between the Italian clubs is known as Derby della Madonnina and dates back to 1910. The rivalry came into being when the two clubs split (before they were one) and now it is so intense that whenever these two teams play each other you can expect some kind of on pitch scuffle between the players.. The fans of both sides hate each other virulently and they taunt each other during their match with various chants and songs. Things go overboard sometimes, as in 2005, when a match between the two sides was stopped because the Inter crowd threw a flare at the Milan’s keeper.

2. Celtics vs. Rangers
The Old Firm, as it is commonly known is possibly the most intense rivalry in soccer ever. One of the oldest rivalries in the history of club soccer dates back to 1888 when Rangers lost to Celtics 5-2. The reason for such intense rivalry is religion. Rangers are supported by the Protestants whereas Celtics are supported by the Catholics. Blood shed, riots and deaths used to be the usual aftermaths of the game between these two great rivals, but nowadays these games are much better policed, and most of the sparks remain on the pitch, during the game itself.

1. Barcelona vs. Real Madrid
The two biggest Spanish clubs are the two most accomplished sides in Spain, far ahead of any other Spanish team. The reason for this rivalry is the same as Celtics-Rangers rivalry i.e. religion. Barcelona is supported by Catalonia and Real Madrid by Castile, two rival religions in Spain. The political aspect is also a big factor – with most Barcelona fans desperate for Catalonia to become independent from Spain. Both the clubs have a huge fan following and irrespective of where they play, supporters from all around the world come to watch these two side pit themselves against each other.

For more information on Barcelona vs. Real Madrid, go to:
http://en.wikipedia.org/wiki/El_Cl%C3%A1sico