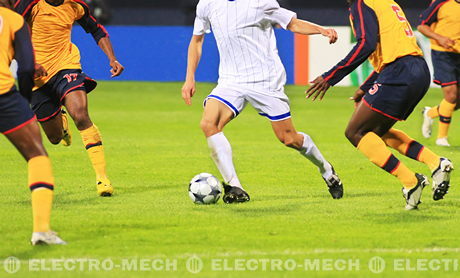 Midfielders are arguably the single most important members of a team and a huge responsibility rests on their shoulders to track back and defend, as well as to get forward and attack. These are the players who chalk up 10 to 12 kilometers per match, and the ones who need to have the greatest stamina, the ability to shoot, tackle, and dictate the pace of the game. They need to have great footballing intelligence, so as to create opportunities for the strikers with defense splitting passes. All in all, the midfielder role is the most technical, and the most challenging role in soccer.

That said, in this soccer scoreboards feature, I have selected the four midfielders, who I consider to be the best in work soccer at the moment.

4. Wesley Sneijder
The winner of the Best Midfielder in 2010 by FIFA, Wesley Sneijder plays for Inter Milan. He has amazing passing abilities and is brilliant at free kicks and set moves. He is in fact well known as a dead ball specialist. His long distance shooting, assisting ability and passing ability are all standout, and rumors are abound that Manchester United wants him, so now let’s wait and see if Wesley accepts the deal or not!

3. Cesc Fabregas
The skipper of the Gunners is a class apart from most other midfielders. He has all the qualities of an offensive midfielder and he has been an huge asset to the Gunners in recent years. His vision is something that almost no other player can match, and these abilities are particularly noticeable in the English league, where technical skills tend to be at a minimum. His future with the Gunners is in doubt because of the well known fact about his love for Barca. I don’t think Barca need him though because of…..

2. Andres Iniesta
The player with the most amazing of passing abilities, Iniesta has brought Barcelona as well as Spain incredible success in recent times (Remember the Final of FIFA 2010?). He has unmatched skills and is a naturally graceful player who rounds players and distributes the ball perfectly. There is no chance that he will leave Barca, the best club in the world right now, and with him at the helm the team are sure to keep on wining in the next few years.

1. Xavi Hernandez
Well! Who else did you expect to be the best midfielder in the world other than another Barca player? This guy certainly deserves to be on top in this list. Apart from his superb passing and assisting abilities, he is the most energetic player for Barca. Despite being 31, he runs more than Busquets, Dani Alves or any player in the team. What makes him so special? His defense raking passes – a skill which he has honed to perfection. Xavi is the only player to have played more than 550 matches for Barcelona, and it is highly unlikely he will ever leave the team. Who do you think will win the Champion’s League next season?!

For more information on Xavi Hernandez, go to:
http://en.wikipedia.org/wiki/Xavi