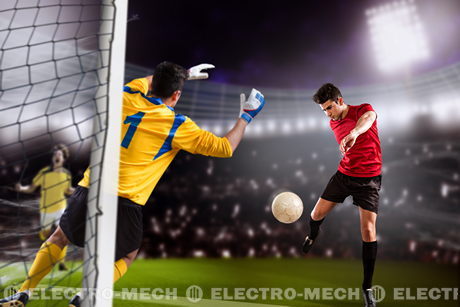 Ghana, West Africa might be known for their production of cocoa, but they are also renowned for their excellence in football (soccer in the U.S.). Most recently, the Golden City Park was honored to receive a donation of a well needed electronic scoreboard. This donation lit up the field and the faces of their passionate fans.

Ghana is part of the area known as the Gold Coast, a well known area of Africa. The location was originally named for the Empire of Ghana, which reflected back into the ancient past and once encompassed much of West Africa. Ghana takes great pride in being a member of a number of international and national organizations. These include everything from The United Nations, to the South Atlantic Peace and Cooperation Zone, and other well renowned organizations as the Commonwealth of Nations, the Economic Community of West African States and the African Union.

The people of Ghana had a lot of European influence throughout the last two hundred years; and this includes many of the sports that have been shared and played in the area. Football is a major sports interest and one of the best parks to view the game is the Golden City Park in Berekum. The Chelsea club was actually the first athletic club of Ghana to successfully make it to the African club competition. Most recently, there was an anonymous donation of an electronic scoreboard to the campaign for the CAF Champions League. The donors were said to be friends of the President, Berekum Chelsea, Emmanuel Kyeremeh.

The Golden City Park stadium has had an intense amount of reconstruction in the last number of months in preparation for the Group Stage. The addition of flood lighting may have been one of the best moves for the park, but the highlight has been the addition of a top of the line, high tech electronic scoreboard. The intent of the scoreboard is for the use of all of the people of Berekum and everyone who chooses to use the park. It is an electronic scoreboard for the people.

The plans for the electronic scoreboard are a well needed addition to a park that exemplifies the true spirit of sports and the people of Chelsea and Ghana itself. The team and fans of soccer take their sport very seriously and they are incredibly proud of their own Golden City Park. There is probably no where else in the country that exemplifies the true spirit of good sportsmanship and embracing the enlightened attitude of international friendship. The games at Golden City Park are pretty much sold out, and the attendees are fans, friends and family of the players.

The electronic scoreboard will enhance the excitement of every game and allow the attendees to view score updates in a real-time scenario. The people of Chelsea will be able to enjoy the use of the scoreboard with a variety of their sports and teams that play at the park. To say that the fans are appreciative is an understatement. The addition of the electronic scoreboard is a moment of pride for their teams and their country.