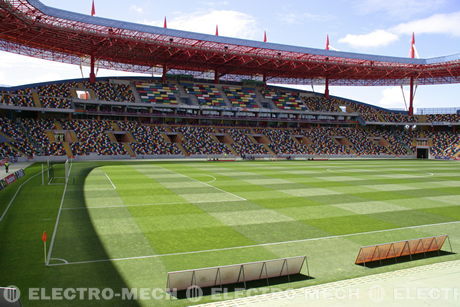 Musical Chairs; dribbling drill and fitness; Ages 8-12
Variations on this dribbling drill can include adding different moves and varying the size of the circles. These changes will enhance their fitness levels.

Players will have their own soccer ball and will dribble around the small large grid at a decent pace, avoiding each other and maintaining a heads up position. After they have been dribbling for a specified amount of time, call out the word ‘Switch’. When the word is called out, each player must stop their ball, leave it where it is located and run around a cone in the outer circle, then run back into the small circle to a new/different soccer ball. It’s important that this is done quickly and that they go to a completely different soccer ball. The players will then continue dribbling.

Once the players seem comfortable with the new dribbling concept, remove one player’s ball. This player must now run around the drill without a ball. Next call of ‘Switch’ occurs and players will once again run to the outside of the circle, then back into the smaller one. Players that end up without a ball after the change has been called has to run around the grid.

Set one a 25×25 large grid (or big square) and a 10×10 smaller grid (or little square) within the larger grid. The smaller grid on the inside is called the ‘Haunted House’.

Heading Activity; Ages 11-14
Variations on this can include mouth shut, eyes open.

1 v 1 Dribbling and Fitness; Ages 6-12
Create a line on the field. Pair up your players and have them sit cross-legged (Indian style) and with each facing away from the field (or can be facing towards the coaches). Each pair will have a soccer ball between them.

The coaches will go around and kick the various balls away from the pairs and into the field. Once the ball enters the field, each of those players will get up and move as quickly as they can to win and, using dribbling will return back to the line. Each player that successfully wins and returns the ball to the line earns one point. The player with the most points win.