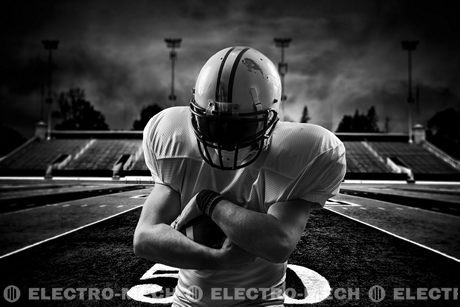 Origin: The origins of both of these sports lie in the British sport of Rugby. British soldiers brought the game over to North America, and the humble beginnings of football lie in the games that they played in the University of Harvard in the U.S. and McGill University in Canada. The first football scoreboards to be produced were then utilized as McGill University went on to play Harvard in a series of games, and a tradition was born.

Size of pitch: The field is smaller in American football because in the early days of playing rugby at Harvard the available fields were smaller than in Canada. Nowadays, the Canadian pitch is 110×65 yards, whilst the American pitch is 100×53 yards. The difference in field sizes also explains the positioning of the goalposts: in the U.S. they are on the end line whilst in Canada they are on the goal line.

Number of players: The smaller pitch in American football led to a trimming of the number of players on each team so that the field was not too crowded, and as a result American football has one less player per team than Canadian (11 as apposed to 12). Both games require the same number of players in the scrimmage, but Canadian football has one additional player at the back. This affects the offense and the defense – in Canada they have 2 slot backs and 2 defensive halfbacks and a single safety. In the U.S. there is one tight end and 2 safeties respectively.

Number of downs: American football has 4 downs and Canadian has 3, and this remains the most significant difference between the two games. This affects the game as a whole – it is more pass and kick orientated in Canada as a result of the reduced number of downs.

Kicking: There are some differences in the kicking rules too. Firstly, the Canadian game does not have the fair catch rule, in which the returner can signal for a fair catch and end the play if he feels that he has no chance of moving the ball forward. Another difference is that in Canada the kicker can recover and advance his own kick. This makes kicking a much bigger part of the game for the Mounties. A third difference in Canadian football is that from the kicking team, only the kicker and players behind him may be within 5 yards of the ball if the ball has not been touched by an apposing player. Also, in Canadian football any kick that goes into the end zone is a live ball except for successful field goals. Lastly, a ball kicked into the end zone in Canadian football is live (not including successful field goals), unlike in American football.

There are some minor differences in the two games in addition to those given above (such as time rules), but they are relatively insignificant.