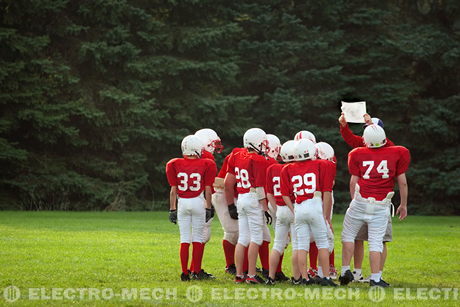 In a league where 300 pounds is not rare and the physical hits cut careers down to an average of two seasons, maybe it’s not too weird that players like to get a little loose after the game. To make this list of all-time scandals, players, coaches and performers really had to stand out with something crazy–not just your run of the mill DUI or assault. Think big.

10. Barret Robbins. This was a scandal that had an explanation. In their week ahead of a Super Bowl matchup with the Tampa Bay Bucs, the Raiders sent their star center Robbins home without explanation. It came out that he had gone on a drinking binge in nearby Tijuana — inciting jokes and disbelief from every source. Later it was revealed that Robbins has bipolar depression, which he is now treated for.

9. Pacman Jones. Enough said? No, probably not. Maybe it is his cool name but Pacman was only in the league two years and managed to get tossed from two teams. The two most notorious incidents were getting in a fistfight and shooting incident in which his manager was shot and paralyzed. Next, Pac decided to kick his bodyguard’s butt and the police had to get involved to stop him. Now, going where all greats go, Pac is in Pro Wrestling.

8. Tank Johnson. Maybe the cool nickname thing leads to trouble on its own? Tank loved weapons (makes sense, no?) and he was arrested three times in 18 months for possession. The third time was a charm when police raided his house and found 2 assault rifles in his stash. Tank was removed from service.

7. Reggie McNeal. It is hard to limit this to just two Bengals. The whole team was so messed up during the 2006-2007 season, how do you pick? McNeal did alright scoring a police assault arrest while he was smoking promethezine. Reggie is now playing in Canada.

6. Chris Henry. The bad boy of the bad boys in Cinci. He says he doesn’t love scandal…maybe but scandal loves him. During a 1 year period Henry managed to: get arrested for marijuana, get a DUI, get arrested for a concealed firearm, and (the coolest of all) giving booze to sixteen-year-old girls. Chris gave the rest of the league a blueprint for crime.

5. Carolina Panthers Cheerleaders. Not to be outdone by players, the sidelines got involved. In 2008, a fight broke out at a dive bar when two cheerleaders from the Panthers were in the bathroom way too long. Many reports came out about what was happening in there and the cheerleaders were dropped quickly.

4. Ray Lewis. You know its an awesome list if accused murder only clocks in at number four. Ray just got done with the Super Bowl and was partying when an altercation started (does this sound familiar at all?) and two men were stabbed allegedly by Lewis. Several witnesses corroborated this but at his trial they seemed to forget exactly what happened — living in Atlanta, they have to sort out which crime was which.

3. Janet Jackson. “Equipment Malfunction.” The breast that was seen around the world was an accident during the halftime show of Super Bowl 38. MTV, the producer, was permanently banned from the NFL and since then crowds have been subjected to Paul McCartney, the Rolling Stones and any old white guys the league can find.

2. Michael Vick. I still have the Gatorade commercials in my head while Vick sits in jail for organizing and betting on dog fights in Atlanta. He also had some starring scenes of animal cruelty in federal reports. He was one of the top 10 richest athletes at the time… So, he needed some extra cash or something?

1. Bill Belichick. Hmmm…what do you say here? Bill and company resurrected Nixon and taped the opposition, cheating and getting plays ahead of time — it was proven! They won three Super Bowls and countless other games doing this and they were not stripped of their titles or the coach permanently banned? Do I smell double standard?

Here, at Electro-Mech, we not only produce electronic football scoreboards but we also provide the latest news and history of your favorite sport. Check out our other football articles covering a span of topics.