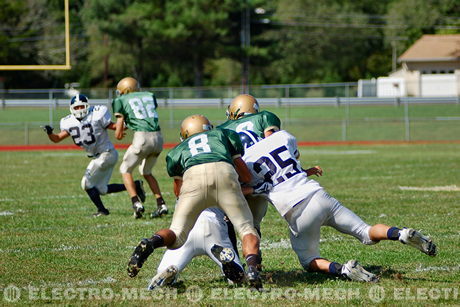 In a football scoreboards feature, I have taken a look back at the three most riveting, most talked about Superbowl games ever to have been played.

Super Bowl is “the” sporting event of the year for all Americans. It is the event when Americans spend more than $50 million on food and drinks, making it the day when Americans consume the most food, second to Thanksgiving. It is the day when 14,500 tons of chips are consumed, when over 100 million bottles of beer are drunk. It is the day…well you get the picture! With the forty fourth Super Bowl just completed, let us look at the top 3 best Super Bowl games ever played.

3. New York Giant vs. Buffalo Bills, Super Bowl XXV – if you were watching this game then you probably had no nails left at the end of it. It was such a nail bitter of a game, it’s not even funny! This is the only game in the history of the Super Bowl which was won by a margin of a single point. The Giants got to take the Vince Lombardi trophy home with the football scoreboards showing 20-19 when the whistle blew. The Buffalo Bills could have won the game (and the Bills fans probably believe so!) only if their place kicker Scott Norwood had not botched a wide right field goal attempt. There were a total of 5 lead changes during the game, while Otis Anderson, the Giants running back, was awarded the super bowl MVP for that year.

2. St. Louis Rams vs. Tennessee Titans, Super Bowl XXXIV – if only the Tennessee Titans’ wide receiver Kevin Dyson was 36 inches ahead i.e. a yard ahead of Mike Jones, the Rams line backer, the game’s outcome would have been completely opposite. Because that’s what separated the Titans from hoisting the trophy that year; a yard! With 6 seconds left on the clock, and the Titans trailing one touchdown behind, Steve McNair and team gave it one last shot and drove into the Rams’ 10 yard line. However, as fate would have it, even with his arm reaching out Dyson fell a yard short of the end zone. It was a play worthy of a movie, and later it became to be known simply as “The Tackle”.

1. New England Patriots vs. New York Giants, Super Bowl XLII – This Super Bowl has been deemed the best in history for several reasons, but we only need to look at two to convince us! First, the Patriots were undefeated in that season and were, of course, expected to win but, the underdog Giants lead by an extremely talented Eli Manning managed to win and shatter everyone’s expectations. The second reason is that this is the game in which Giants David Tyree caught the ball, not with two hands but with his right hand and his helmet. The catch went on to be the best in history. Tyree’s catch helped set up the final, game winning touchdown for the Giants with only 35 seconds left.

For more information; go to: en.wikipedia.org