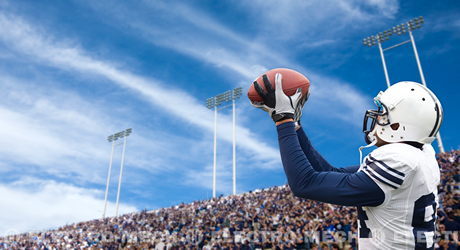 In a football scoreboards feature, I have taken a look at the defensive lineman position in the NFL combine. If you are a defensive lineman, it is all about getting to the quarterback. There is one drill at the NFL combine that all coaches prefer to all the others for a defensive lineman. In this drill there are, essentially, two moves which every defensive linebacker and lineman rushing the quarterback have to demonstrate: the Rip and the Swim. These are 2 very different techniques but actually they are quite basic and simple. If you can show that you can do this drill to a very high level, you are on your way to getting into the NFL.

In the next stage i.e. the Swim technique, you attack the defensive tackle with your outside arm and then you swim over the top (with your right hand). Through this technique what you are trying to do is get the tackle off-balance and then swim and get around him, making your way towards the quarterback.

What Are the Football Scoreboards Team Representatives Looking For?
Asides from these 2 techniques, there is running “the arc” and this is also an important skill for the team representatives. They will set up a bag; about 4 yards away from you, which simulates the offensive tackle. They want you to get into your stance and see your first step explosion. How do they gauge your first step explosion? There is going to be a coach standing with what looks like a broomstick with a football attached to its end. When he moves that broomstick and you see that ball move, you get off as soon and as fast as you possibly can. The first step get-off is critical to any good pass rusher in the NFL. So this is the first coaching point: you are in your stance, you’re looking at that football and as soon as you see movement, you get-off right away!

After you get off, you must stay low and execute the rip and the swim. Get underneath and around the first bag and as soon as you get around that bag you flatten out and rush to the quarterback. The tackle that you rip goes to one side, while the tackle you swim over goes to the other.

The most important aspect is to see what you level of ability is in dipping your hips, bending and rushing towards the quarterback. You have to dip low, rip through and accelerate through to the quarterback. This maneuver is called the “Dip and the Rip”.