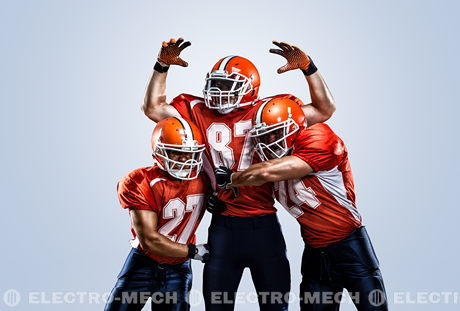 Factors in Choosing a Formation

NFL defensive coordinators often base their choice of a formation on which defensive positions their teams are strongest at. For example, if a team has a higher-than-average number of talented linebackers, the coach will probably choose a formation that puts four linebackers on the field. Conversely, if a team’s strength is its defensive linemen, the coaches will want a formation with four linemen. Some of most successful defense football formations in NFL history were based on the strengths of a single star player.

For more than 30 years, two defensive formations have dominated the NFL: the 4-3 and the 3-4. Teams have experimented with variations of these formations, often with great success, but the basic structures remain the same. In the 4-3 there are four defensive linemen equally spaced along the offensive line. Behind them are three linebackers, also equally spaced. The four defensive backs consist of two cornerbacks playing a few yards off the line on the sides of the formation, and two safeties who play farther back and more toward the middle of the field. Keys to success with this formation include having a strong middle line backer, defensive ends who are good pass rushers, and defensive tackles who can clog the middle of the line.

The 3-4 defense was introduced into the NFL later than the 4-3. Although both allow for a great deal of flexibility, the 3-4 can be an especially effective football tactic against a strong running attack. The three defensive linemen include a nosetackle who plays over the center. The other two defensive linemen attempt to plug the gaps between offensive linemen and allow the four linebackers behind them to make plays. The four defensive backs are positioned much the same way as they are in the 4-3. Ideally, the 3-4 has a dominating nose tackle and two outstanding outside linebackers, one who can cover the tight end and one who can terrorize the quarterback with his pass-rushing prowess.

When an offense faces an obvious passing situation, such as third-and-long, the defensive coordinator will often bring in an extra defensive back and create a “nickel” formation. “Nickel” refers to the present of five defensive backs. This formation is also used when the offense deploys an extra receiver, such as a flanker.

A team that is up against an inexperienced quarterback will often employ the zone blitz formation. In this formation, more defensive players are placed along one side of an offensive football formation than along the other. The defense seeks to create an open lane for a defender near the line while protecting against a long pass by assigning other defenders to different zones in the secondary. Another defensive football formation is the goal-line defense, where the defenders play closer to the line of scrimmage when the offense is near the defense’s end zone.