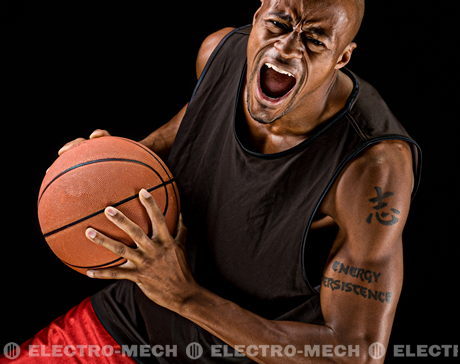 At Electro-Mech, we not only offer electronic basketball scoreboards but also news and history on your favorite sports. Imagine an NBA game without a time clock or scoreboard. Impossible, right? That’s why we’re here. We provide scoreboards to light up any game, to count down the seconds and to brag about a win.

The longest game in NBA history was played on January 6, 1951 between the Indianapolis Olympians and the Rochester Royals. After 78 minutes of gameplay and a record 6 overtimes, the longest basketball game concluded with a relatively low score of 75-73 in favor of the Olympians. This was a low scoring season and was one of the last seasons before the league moved to step up team scoring, introducing the 24 second clock four seasons later. Ironically it was the losing Royals who finished second in the Western Division. In the postseason they won the NBA Finals by defeating the New York Knickerbockers. The eventual winner of the longest game in NBA history, the Olympians, went on to finish fourth in the Western Division. They were pushed out of the Western Division Semifinals by the Minneapolis Lakers and their star center George Mikan.

More recently, the longest basketball took place on November 9, 1989 in a game between the Minneapolis Bucks and the Seattle Supersonics. It was the longest game in NBA history in the thirty five years since the adoption of the 24 second clock in 1955. The game ended at the end of the fifth overtime with only a one point difference, 155-154, in favor of the Bucks. The score was 103-103 at the end of regulation but extended to a total of 73 minutes after neither team could quite make the final basket in overtime. In fact, Seattle has a chance of tying the game and making this the longest basketball game ever but came up 1 point short during its 8-0 at the end of the game.

Several career records were set during this marathon game. For Dale Ellis, the Supersonics star, it was a record scoring night with 53, a career high. Twenty of those points came during the 5 overtimes. He also set a record that stands today for the most minutes for any player during an NBA game with 69 minutes. On the winning side for the Bucks, newcomer Ricky Pierce made a career-high in scoring by putting in 36. Neither team had remarkable seasons after this game. The Seattle Sonics missed the playoffs altogether ending with a .500 record which was good enough for fourth place in the Western Division, equalling the Houston Rockets but losing the tiebreaker criteria. The Bucks made the playoffs only to meet the Michael Jordon-lead Chicago Bulls, who bounced them out of contention easily.