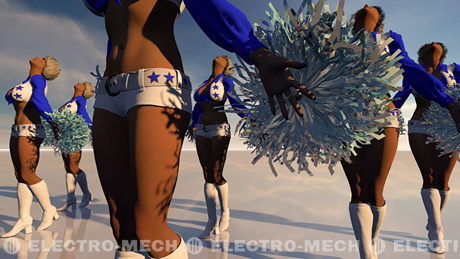 As Americans, we don’t think twice about cheerleading. This is part of our culture and we are introduced to the tradition at a very young age in school. In the U.S., a certain stigma has developed on the topic of cheerleaders, as they fight the generalized concept of ‘dumb blondes’ that usually date the jocks. The idea of ‘cheerleading’ is not one that is shared or even a consideration in other countries. Europeans are completely alienated on the topic and, it is often a topic of both amusement and irritation.

Americans take our sports very seriously; but with that, comes an idea of fun and competition. We associate sports with smiling, laughter, fans, stadiums, players, and of course, cheerleading. This is not always the case in other countries. Some cultures do not express emotions, such as smiling in public, as they feel it makes them look stupid or, in a kind of ‘Vulcan’ concept, makes them appear weak.

Germany is a country that has had a difficult time wrapping their arms around the idea of cheerleading. Hitler built the Olympic Stadium in 1936 for the Olympics held in Berlin, and ironically, that is now the home of a football team associated with the N.F.L. Europe, called The Berlin Thunder. The challenge in this situation is that Germans really don’t have any understanding of American football, least of which includes cheerleading.

The selection of a cheerleading team in a culture where the girls feel stupid smiling in public has meant trying to bend the rules to accommodate them, so that they can appear more akin to a group of American cheerleaders. The ladies agreed to smile while on the field (and thereby be seen on the electronic scoreboard view) but not at public events.

There are five N.F.L. European teams in Germany, which is the most in any European country, so the idea of football is catching on, along with the 250 professional cheerleading teams. It remains, however, a specifically American in training. While most of the cheerleading is accomplished in English (i.e.: there isn’t any German translation for rah-rah-rah), overcoming the hurdle of the more solemn German attitude for sports has been a slow process. German sports games don’t allow a place for smiling young ladies with pom-poms.
Another American culture-thing is that when in sports, including cheerleading, you arrive at practice and leave any attitude at the door. The cheerleaders are taught to not question the trainers and coaches and abide by the rules. Not so in Germany, where they express their opinions and feelings, often to the surprise of the trainers.

There is an upside to cheerleading in Germany. Unlike their U.S. counterparts, there isn’t any kind of social status associated with being a cheerleader. They therefore, don’t suffer the slings-and-arrows of criticism that are experienced in the U.S.

From a performance perspective, if you look up at the electronic scoreboard or view the cheerleading teams onstage, you would not be able to distinguish them from the U.S. girls. They don the same skimpy outfits, and, in what can only be described as excellence in acting, appear to be the same upbeat ladies that help to keep a game in high spirits.